Please Note: USPS has increased the cost of their shipping we apologize for any inconvenience this may have caused. Dismiss

Raised as a cowboy, Ace Reid received his training on 4,000 acres of old pasture and sorta studied in the school of hard knocks under very, very droughty conditions. After years of shocking wheat, breaking horses and fixing fences on his father’s ranch at Electra, Texas, the 6-footer decided it was easier to draw cowboys than to be one.

Remembering the drought, Ace says he was 21 years old before he saw a fat cow. This may explain the lean animals and the hungry look on the faces of Jake and Zeb, his favorite Cowpokes characters. The characters are earthy people and those who know something of ranching and farming will recognize it as authentic, since Reid knows what he’s drawing about.

You’ve seen Ace Reid’s COWPOKES in roadside cafes, feed and hardware stores, veterinarian offices, drug stores and small town meeting places. To appreciate the impact, one has to travel to the little to 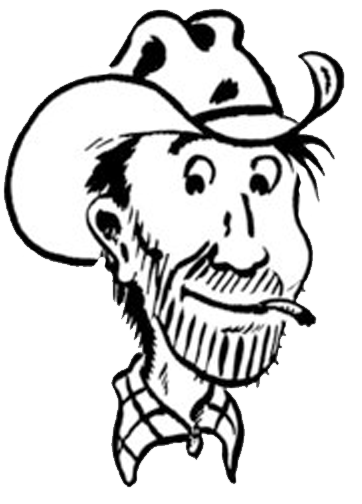 What is it about COWPOKES cartoons that gives it such an enormous following? COWPOKES makes people laugh at themselves and laugh at difficult times. COWPOKES combines the artist and storyteller with a twist of cowboy humor to portray a classic story of western life. COWPOKES cartoons evoke responses such as “I know that fella”, “That happened last week”, or “Ain’t that the truth!” The major characters Jake and Zeb, with Maw, Wilbur, the Horse trader, and Banker Tuffernal, find themselves in hilarious situations involving politics, ranching, banking, real estate, tourists, and horse trading.

Enjoyed by young people and older folks alike, these COWPOKES characters become as real as a real next door neighbor or the man down the street. Avid COWPOKES fans will recall a recent favorite in which Ole Jake is in conference with his banker, angrily saying, “With interest bein’ what it is, its plum ridiculous fer you to ask me fer payment on the principal!” Or, Ole Jake and Zeb watching Maw chop wood and saying, “You’re dern right we’re havin’ an energy crisis. Maw’s wantin’ me to buy her a chain saw!” Or, the two COWPOKES in jail, one saying, “Not only did you pick the sheriff’s cattle to steal, but you had to make them unflattering remarks about their quality.”

“Cowpokes has been imitated, but no one in the field of western art has managed to duplicate the magic.”

The genius of COWPOKES is that COWPOKES manages to take the sting out of hardship to make people laugh. Today COWPOKES, with its special brand of humor, is just as fresh and true as it was when it first appeared. There will continue to be many imitators, but there will only be one COWPOKES cartoon.

error: Cowpokes Cartoons and its assets are protected by copywrite!